This person started out contacting me on Instagram 1 year this month. We started talking and she explained her account was private as she had been a victim of fraud.

Over time we moved to hangouts, and after a few months started planning there trip to Canada from the UK. She needed a work visa so we decided to split the cost 50/50 and the same for the plane ticket.

Long story short. Her visa was denied. She had to reapply. More negative events took place and I fell for it.

Watch out for Verra Ofori Verraofori@gmail.com is her Gmail.com address

Very important: Stop all contact with "her," and block her everywhere. Do not tell them you know they are a scammer, nor tell them you have reported them here. Then read and follow all of the advice in this topic.

What name did the scammer use?:
Verra Ofori

How old did the scammer say they were?:
30

What site/app did you first meet the scammer on? Please provide a link if
possible.:
Instagram

Who made the first contact?:
They contacted me first.

Any other social media profile links used by the scammer.:
Hangouts, WhatsApp, iMessage

Scammer's email address if you have it.:
Verraofori@gmail.com

Name you were told to send the money to.:
Tanko Firdaus
Thompson Oluwatoyin Cecilia

What country/city were you told to send the money to?:
Ghana

How were you to send the money ?:
Western union

What steps, if any, have you already taken to block the scammer?:
blocked on Instagram and hangouts
If anyone asks you for money on the Internet they are always a scammer, 100% of the time.
Blackmail Scammed? Go here: https://www.scamsurvivors.com/blackmail/#/
FAQ viewtopic.php?f=3&t=19
Victim of a scam? Go here: https://scamsurvivors.com/forum/viewtop ... =3&t=26504

What name did the scammer use?: Svensson147, Mezane Svensson

How old did the scammer say they were?: 36

If they asked you to leave the site/app and go elsewhere, where did they take you?: to Whatsapp

Scammer's email address if you have it.: mezane.svensson147@gmail.com

How much money did they demand?:
In the end more than 22,000 Euro (to get the "heritage process" working)

Name you were told to send the money to.: Claudie Guitton, 64490 Lescun

What country/city were you told to send the money to?: France, village of Lescun

How were you to send the money ?: By normal bank transfer

Are there any other details you wish to share? Anything you say may help prevent someone else from being scammed.:

In the beginning, she claimed being 36 (on firstaffair.com), later on told me (also in fake passport scans) that she was born on 25/11/1985. Claims to be half-Turkish, half-Swedish, orphan residing in Toulon, went to Morocco to collect money from her heritage.

Sent: Saturday, July 20, 2019
From: "Mezane Svensson" <mezane.svensson147@gmail.com>
To:
Subject: This is my last message
You know, I never got there, and know one thing, I hate being missed.
Now as for my request, I would like you to make a transfer of 5500EU then I leave you in peace, You have 48h for you decided, After that, your images will be very viral. I will post you on Facebook, send it to your contacts then send it on Youtube, I swear on the grave to my father. Give an answer to my message, If I receive anything from here tomorrow, then I will understand and I will not have pity. I look forward to reading you 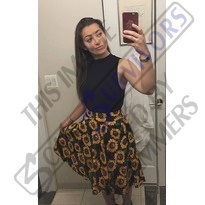 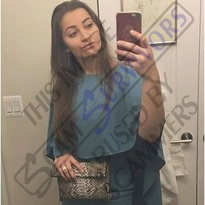 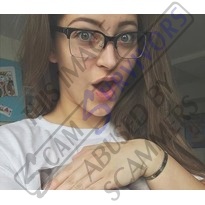 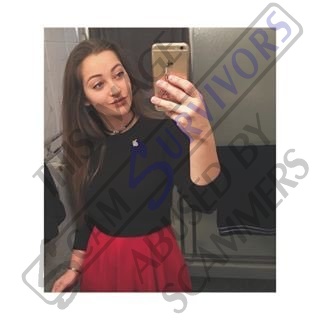 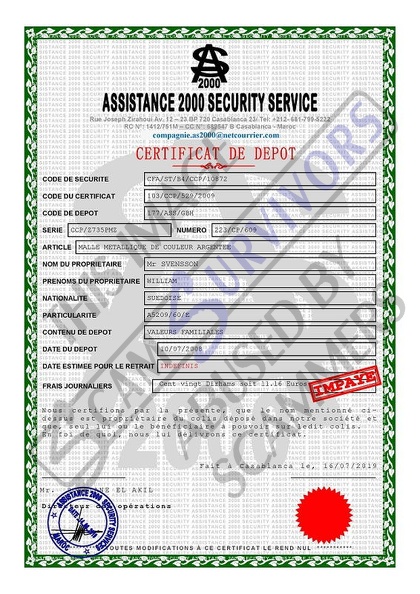 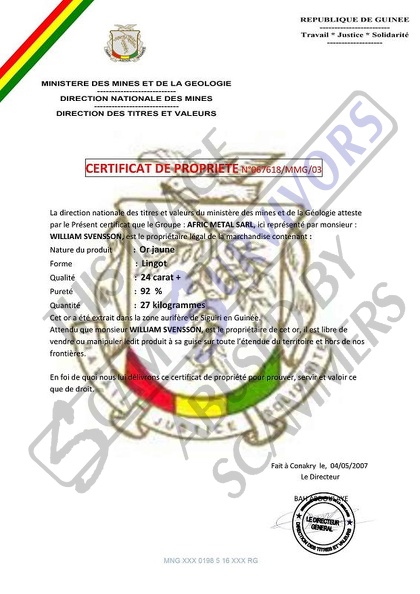 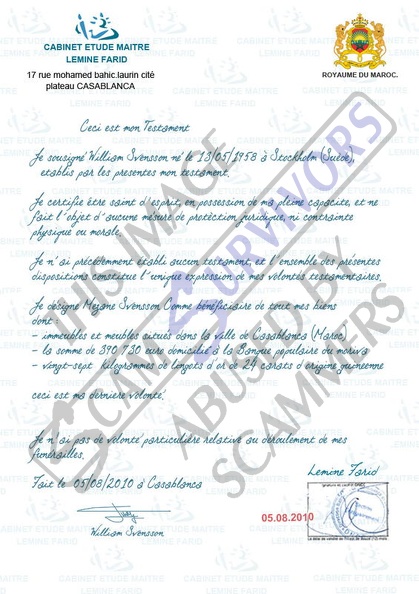 Phone:
+33644672889
Number billable as mobile number
Country or destination France
City or exchange location Métropole
Original network provider* Transatel
"Look for the lies."
Being Blackmailed? Go here and do this first: https://blackmailscams.com/
The information you supply can help others from becoming Victims.

I am Mr BREDOU M'BIA Commissioner of the National Police of Côte d'Ivoire.

The computer security sector of our police has just intercepted pornographic and perverse photographs and videos on the network.

View the erotic proposal and the pornographic offers with respect to a minor named Mezane Svensson, you are kindly requested to respond within 72 hours to the statement against you because in In any event, and in accordance with Article 113-6 of the French Penal Code, French criminal law is applicable to any crime committed by a French citizen outside the territory.
French nationals guilty of a sexual offense committed in CÔTE D'IVOIRE may also be prosecuted in FRANCE pursuant to Law 98-468 of 17 June 1998 for acts constituting sexual offenses, even if they do not are not punished by local legislation (Articles 227-22-24 et seq. of the Criminal Code)

Dear Sir, these acts constitute an offense on our computer network and a crime punishable by law hence the immediate arrest of this girl Mezane Svensson.

You are stopped urgently by the Computer Security in order to be able to find an amicable solution and my duty is to ask you this (legal recommendation):

Sir, do you want to settle this problem amicably by paying a criminal fine or do you want a judicial procedure to be opened?


Beyond this deadline we will take legal action against you and an international arrest warrant will be issued in case you remain indifferent to this message.
To explain to you the facts that are reproached to you, the fight against pedophilia according to the article n ° 800 code 115 stipulates that any traffic of pornographic sexual nature is liable to a jail sentence being evaluated with a sentence of 5 years .
In virtue of the powers conferred on me as Director of the National Police, I will deposit photographs and recordings of the conversation intercepted by our services with the press (print and television presses, social networks), the embassy of your country as well as only from the Ministry of Justice.
Here are some pictures of some people we arrested.
Upon receipt of this email please make all your arrangements for a favorable outcome.

Director of the National Police of Ivory Coast

From the previous post:
"What name did the scammer use?: Svensson147, Mezane Svensson

How old did the scammer say they were?: 36"
"Look for the lies."
Being Blackmailed? Go here and do this first: https://blackmailscams.com/
The information you supply can help others from becoming Victims.